In the July-September period this year (Q3 2017), the standardised average national rent for new tenancies in that quarter was €1,056 per month, up from €965 one year earlier. The rate of rental growth has increased in the quarter when compared to Q1 and Q2 this year. This is according to the latest Residential Tenancies Board (RTB) Rent Index which is produced in conjunction with the Economic and Social Research Institute.

The RTB Rent Index is the most accurate and authoritative rent report of its kind on the private accommodation sector in Ireland, as it is based on data from all new tenancy agreements registered with the RTB nationally in Q3 this year. In total 29,528 new tenancies were registered in Q3, this represents an increase of over 6,000 registrations since the last quarter.

In percentage terms, nationally rents grew 9.5% over the year to Q3, an increased rate of growth compared to Q2 this year. Rents in Q3 2017 were 7% above their previous peak recorded in Q4 2007. While rents began growing again in late 2012, the acceleration in the pace of growth, beginning in early 2014, continued in the most recent quarter. This follows a moderate slowdown in the pace of growth in Q4 2016 and Q1 2017.

While this latest RTB Rent Index, which is produced in association with the Economic and Social Research Institute, found that standardised national rents increased 3.9% quarter-on-quarter in Q3 this year (up from 2.9% in Q2), it must be noted rents are seasonal in nature so quarterly growth rates can display considerable volatility.

Comparison across Regions and Cities

This latest edition of the RTB Rent Index also presents rental data on a regional basis:

(ii) the Greater Dublin Area (Meath, Kildare and Wicklow, but excluding Dublin), and

(iii) the rest of the country.

For the rest of the country outside the GDA (Dublin, Meath, Wicklow and Kildare) the Rent Index shows that the standardised average rent in Q3 was €811, up from €743 year-on-year. Rents outside of the GDA and Dublin were up 9.2% compared to 8% year-on-year in Q2 this year. The quarter-on-quarter growth rate was 5.5% in Q3, compared to 3.5% in Q2.

Further information on the rental patterns in the cities and counties can be found in appendix 1 below or in the full report.

“Strong demographic and economic growth matched with low levels of supply is continuing to put significant pressure on the private rental market and those trying to find a place to live.

This is the third Rent Index report published since Rent Pressure Zones were introduced one year ago. Despite a moderate slowdown in the pace of growth in the first quarter of 2017, quarters 2 and 3 show that rents are continuing to trend upwards, with an increase in the pace of growth in quarter 3. These findings reflect the unprecedented situation of continued low supply of properties and high demand in a volatile rental market.

In reviewing these results it is important to note that;

[Note - Properties new to the rental market are exempt from the Rent Pressure Zone rent restrictions of 4% per year and therefore these higher rents will affect the overall averages. At the moment, a landlord does not have to register these exemptions with the RTB.]

The Director went on to say;

“It is really important that tenants and landlords are aware of their obligations and this is why the RTB is launching a further awareness campaign today, which is aimed at creating greater awareness about rent pressure zones. We estimate that the two videos/infographics will be viewed up to 100,000 times over the next ten days.

“In addition the RTB has launched a range of resources to support landlords and tenants including:

“The RTB would encourage any existing, or new tenants, who are faced with increases over and above the 4% restriction to refer a dispute to the RTB, and the same advice applies to tenants entering a new tenancy if they feel the rent has not been set correctly. Likewise, landlords who want further information on rent setting in Rent Pressure Zones, contact us and we will help you understand the new requirements.”

On an annualised basis, rents in Limerick City have been growing most rapidly, at just over 19.1%, with rents in Waterford growing at 14.6% year-on-year. Rents in Dublin City grew at 10.4% year-on-year, with a similar 11.4 per cent change for Cork City. Galway rents were flat on an annualised basis but the city displays a high degree of seasonality which must be considered when interpreting the trend.

Finally, the Rent Index also provides rental data on a county by county basis for all 26 counties. Rents are highest in Dublin, the surrounding counties and larger urban counties such as Cork, Galway and Limerick. In Q3 this year, there were five counties where the average rent exceeded €1,000 per month (Cork, Dublin, Galway, Kildare and Wicklow). The highest average rents were in Dublin at €1,518. The county with the lowest standardised average rent was Leitrim at €487 per month. 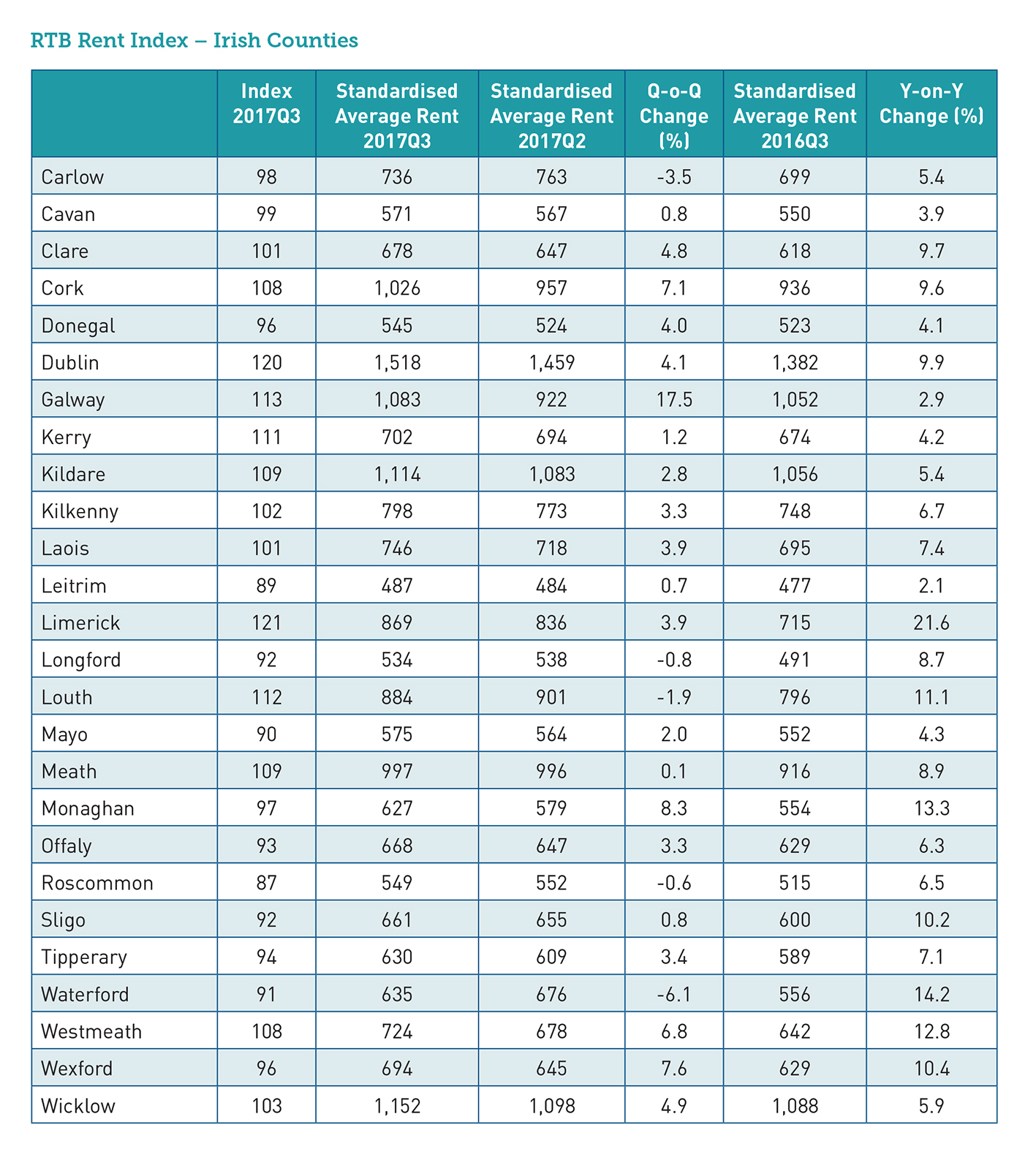